By the end of the season, Kinh Do Corporation (HOSE: KDC) announced its sales reaching the target volume of 2,800 tons of mooncakes, an increase of 15% compared to last year. Given this encouraging result toghether with an impressive growth in the first 6 months, more breakthroughs are expected in KDC’s revenue and profit in the 3rd quarter.

Capturing about 76% of market share of whole mooncakes industry, KDC announced that its mooncake sales reached 2,800 tons by the end of the season as planned, an increase of 15% compared to the year 2013.

It is over 2 months since KDC officially launched the mooncake season in the middle of June; Kinh Do has also accomplished its plan and recorded impressive outcomes in comparison with other enterprises in the confectionary industry.

Sales volume of mooncakes through years

In addition to the domestic market, Kinh Do mooncake is also exported to meet the demand of oversea Vietnamese community for years. Right from the beginning of Mid-Autumn season, KDC has exported nearly 100,000 mooncakes to the U.S market. The total export volume is about 20 tons of traditional mooncakes such as Mixed, Green Tea, Lotus Seeds, Green Beans and Pandan leaf.

According to the annoucement from KDC’s representative, to achieve such impressive results and an overwhelming market share in the confectionery industry, Kinh Do has set up and taken advantage of the largest distribution network with a total of 300 distributors and 200,000 retail outlets. Specifically, for the Mid Autumn Festival, Kinh Do kicked off the market very early and invested in display and sale network across the country in forms of mid-autumn cities, mid-autumn markets and stalls moon to serve consumers. In addition, Kinh Do mooncakes are also distributed through supermarkets and Kinh Do Bakery chain stores, thus enhancing its access to consumers.

According to seasonal factors, besides main products – known as confectionary, mooncakes are expected to boost KDC’s revenue and profit significantly in the third quarter of each year. With the equivalent consumption of Kinh Do mooncakes, in conformity with forecasts of Maritime Bank Securities Company (MSBs), KDC is foreseeable to achieve revenue at VND 1,988 bn in the third Quarter of 2014, an increase of 15% compared to the same period of last year, including the increase of 15% mooncake compared to the year 2013.

Source: Report of the MSBS

With these positive signs from the business outcomes in the first 6 months, MSBS also gave prediction that Kinh Do enhanced its growth rate at 12% compared to the year 2013 with the revenue of VND 5,098 bn and profit after tax of VND 553 bn, and the 2014 EPS expectedly reaches VND 2,135 per share.

In the second half of 2014, KDC’s business outcome is hopefully forecasted with a significant development, with the contribution of new products such as noodles, cooking oil and coffee. In particular, Kinh Do’s new noodles products are expected to officially enter the market in the last quarter.

Thus, KDC’s shares on the stock market remain a steady growth in recent months and temporarily closed at VND 74,000/share on the last transaction on September 3rd 2014. Investors’ expectations in KDC’s shares keep rising due to good news from experts that predict the FTSE Vietnam Index is likely to add KDC into its list. In particular, Nguyen Khoa Bui – a Senior Securities Analyst of the Vietnam Investment and Development Bank (BSI) says after KDC’s private offering of 40 million shares to local shareholders, this share has open room for more than 10%, meeting the criteria of the FTSE Vietnam Index. Mr. Khoa forecasts this Fund will include KDC to its list and purchase over 7.6 million shares. 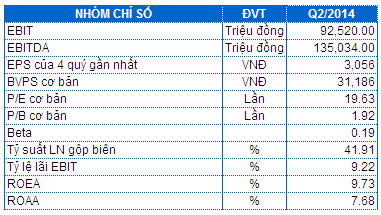