In the third quarter of 2014, Kinh Do will launch new product of instant noodles.

Kinh Do (KDC) navigates its future strategy of developing in Food & Flavor strategy by deversifying its products portfolio which are gradually being realized through the official participation into three new sectors consisting of cooking oil, instant noodles and coffee right this year, besides the core confectionary of the corporation.

After a period of stagnation which seriously affected the purchasing power and consumer demand, the economy has some signals of growth. The Purchasing Managers Index (PMI) is constantly above 50 points, the production volume has increased during 8 consecutive months, the CPI inflation (Consumer Price Index) was controlled and might be lower than the goal of 7%, set by the Government, the interest rates has a down-turn significantly to 9-12%/year. In addition, with the economic development policies of the Government, the Vietnamese enterprises currently have the opportunity to accelerate their growth through industrial diversifcation and boosting the international cooperation via variety of agreements of TTP, ACE, RCEP, etc.

Considering time is ripe for action after two years of pursuing the M&A which is the industrial expansion and diversification strategy, Kinh Do has officially got involved in 3 new categories including cooking oil, instant noodles - seasonings and coffee, to best meet the consumers’ whole-day need. Especially, Kinh Do’s new product of instant noodles will be launched right in Quarter 3 of 2014.

Kinh Do has a first step to stretch out to the sector of instant noodles which is known as staple category and potential outlook. The market scale achieved more than VND 22,340 billion. The growth rate has sharply increased over 20% per year in recent years. Although the growth rate lowered down during the last two years, Vietnam with the young population market has potential and good growth rate for developing the categoy of instant noodles.

By choosing the cooperation with the available companies to take advantage of expertise in production, local distribution and knowledge, Kinh Do embarked on a comprehensive cooperation with Saigon Ve Wong Co., Ltd – a partner who has the seniority, expertise, and technology of the instant noodles with A-One brand.

According to the World Instant Noodles Association, the demand of instant noodles in Vietnam ranked fourth worldwide with 5.2 billion packages. In addition, as researched by Euromonitor, the annual retail sale of instant noodles grows expectedly 3%. Although the consumption in Vietnam is quite high, the market for instant noodles still has some likely improvement and the demand of consumer continues to rise thanks to the morden lifestyle of the people. Above mentioned are important elements to lead Kinh Do into this new category.

The countries’ demand for instant noodles in 2013

By the cooporation with Saigon Ve Wong, Kinh Do will expand the product of instant noodles and sauces in form of OEM cooperation (Original Equipment Manufacturer) under Kinh Do’s brand.

This business model gives prominence to the distribution system as a core point leading to the success. Meanwhile, KDC has established a stable management system and built up the foothold in the food category in Vietnam, especially with 200,000 retail outlets and 300 food distributors and cold distribution chain nationwide.

According to assessment  of the Viet Capital Securities (VCSC), the cost spent on advertising and marketing to launch and develop products will rise quite high, estimated at USD 15-20 million to win the market share in two competitive markets. Kinh Do with advantage of strong trade-mark proudly gets into those new categories.

Following the route, Saigon Ve Wong initially takes charge of producing the instant noodles, instant gruel and instant Pho for Kinh Do. And Kinh Do in turn helps Saigon Ve Wong distribute the spices, seasoning powder product. Kinh Do is expected to launch the products of instant noodles, instant gruel, and instant Pho in Quarter 3, 2014. Then, Kinh Do will select a number of seasoning products suitable for the Vietnam market and co-produce to launch these products to the market.

According to statistics from the World Instant Noodles Association, the market share of instant noodles in Vietnam mainly belongs to Vina Acecook (52%), Masan (17%), Asia Foods (12%) and the others sharing the rest 20% of the market share. In particular, a survey by Euromonitor revealed that Vifon, Saigon Ve Wong (Aone), and Colusa - Miliket account for 2-5% of the market share.

Not only the participation in the sector of instant noodle - seasonings, do KDC’s ambitions to expand and officially set foot in the market of cooking oil and coffee through a cooperation to purchase shares with two local companies. 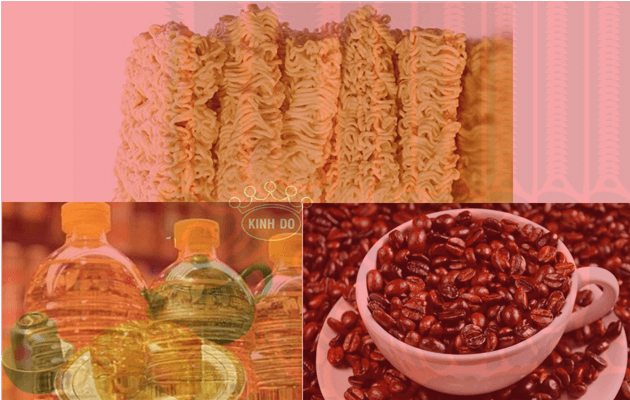 By this cooperation, KDC will tap into its knowledge about the distribution and market in order to rationalize and develop companies involved in cooperation, thereby diversify products and commodities to satisfy the needs of consumers throughout the day.

In 2013, the market scale of sauce category reached VND 15,303 billion with the growth rate of 6-8%; coffee category was VND 4,757 billion, of which beans and ground coffee was VND 1,000 billion with growth rate of 15-20%. The market share of the coffee category belongs to big companies as Nescafe, Vinacafe, and Trung Nguyen. KDC’s goal is to purchase a coffee brand available in Vietnam market. The other sector is cooking oil with the scale of this market in 2013 reached more than VND 22,300 billion with the growth rate of 7-9%. KDC expectedly buys shares of available companies in order to integrate and improve the advantages of the two parties, which aims to continue to enlarge those companies.

Investors still have opposite judgments about the prospect of KDC for its above-mentioned expansion.  Obviously when “encroaching” into these new sectors, KDC showed its willingness with the scale and foundation in core competitiveness which the corporation has built up and a positive business result in difficult circumstance of the economy in recent years. Will KDC “harvest the achievements” with new categories under the glory of Kinh Do brand which has successfully energised and dominated the confectionery market during the past two decades?

According to Minh Hang - VietStock