KINH DO TO INCREASES OWNERSHIP IN VOCARIMEX UP TO 51%

If its control of Vocarimex is securied , Kinh Do would have great impact on the domestic cooking oil market

On November 10th, the Board of Directors of Kinh Do Corporation (KDC) approved the proposal to make additional investment in Vietnam Vegetable Oils Industry Corporation - Vocarimex to be submited for approval in the upcoming Extraordinary General Meeting.

Accordingly, KDC will buy out additional shares from the market to increase ownership in Vocarimex to 51%.

Vocarimex made its initial public offering (IPO) in late July 2014 by auctioning 37.9 million shares, equivalent to 31% of its charter capital. Besides, Vocarimex also sold 32% stake to two strategic investors namely Kinh Do (24%) and VPBS (8%).
After equitization, the state only holds 36% stake in Vocarimex.

Regard to Kinh Do’s report, by the end of September 2014, the company has not officially hold shares of Vocarimex yet.
Vocarimex is now an important player in the Vietnamese vegetable oil (cooking oil) market. Currently Vocarimex is a parent company holding 51% share of Tuong An Vegetable Oil and large stake in 3 other cooking oil businesses namely Cai Lan Oils (Neptune, Simply), Golden Hope Nha Be and Tan Binh vegetable oil. 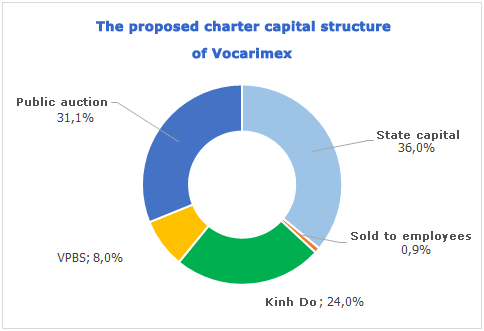 Being a dominant shareholder of Vocarimex, Kinh Do can compensate for the revenue losing when selling its snack busness.

Under the plan, Kinh Do will transfer 80% stake in Kinh Do Binh Duong which operates Kinh Do’s confectionary businessto Mondelez International. The pre-tax transfer price was set at VND 7.847 billion or an equivalance of $370 million.

This transaction will be submitted for approval in the upcoming extraordinary shareholders' meeting.